Elegant and Sophisticated or fun concepts such as cigar boxes, purses and portraits

Theme‎ and character cakes to delight the little ones

Mutual love for baked goods and a philosophy of sharing joy

“Joanie and Leigh’s Cakes” are known for their original wedding cake designs, over the top artwork, and one-of-a-kind desserts. They have been featured extensively in press, television, and film. Their work has appeared in magazines including “The Hollywood Reporter, “InStyle”, “People”, “Martha Stewart Weddings”, “TIME” and “Vogue”. Many television appearances include “Martha Stewart Living”, ”, Preston Bailey’s “Mr. Fabulous”, the first season of WE TV’s “Amazing Wedding Cakes” and “Platinum Weddings”, The Lazy Environmentalist (Sundance), and InStyle Celebrity Weddings” (CBS).

Film, television and the web showcasing dessert trends and ideas.

Joanie and Leigh work with top celebrities, party planners, and style aficionados to create some of the most memorable events. Joan and Leigh worked with Diane Keaton as her baking coaches for the movie “Because I Said So”. They worked on the Tim Burton film “Alice in Wonderland”, creating the iconic ‘EAT ME’ cake and other Mad Hatter tea party delights. Their creations have been featured in many films, including “Bridesmaids”, and regularly on a multitude of television shows.

“Joanie and Leigh were awesome to work with. Our wedding cake was beautiful, delicious, and exactly what we wanted. Everyone was drooling over it all night long. Their bakery is cute and was a fun escape from the other chores of wedding planning. I will definitely use them for other cakes and events in the future.”

If you wish to make an apple pie from scratch,
you must first invent the universe. 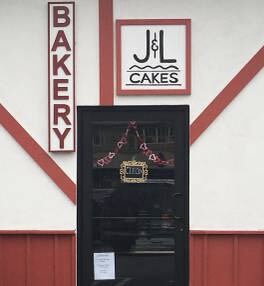